In The Artist's Studio with Ruth-Anne Siegel

Ruth-Anne Siegel in her studio.

The first thing a viewer notices about a painting by Ruth-Anne Siegel is color; if color had a voice these paintings would be performing live at Lollapalooza this summer.  Siegel, a fine art painter based in Palo-Alto, has loved rock ‘n’ roll since she was a child and finds nothing else as inspiring when creating her dazzling, high-spirited paintings.

Siegel understood from an early age that she wanted to be an artist. As a child growing up on Long Island, New York during the 1970s, Siegel was always drawing and filled up a new sketch book every few months.  In common with many children of the 70s, Siegel and her older brother watched a lot of TV; Siegel will never forget that when Nixon resigned, she was watching Bugs Bunny. The comics in particular made an impression on Siegel.  Along with her brother, she wrote and illustrated comic books such as “Lil Red Riding Hood Gets Eaten”; a copy of which might still be tucked away in Siegel’s attic. 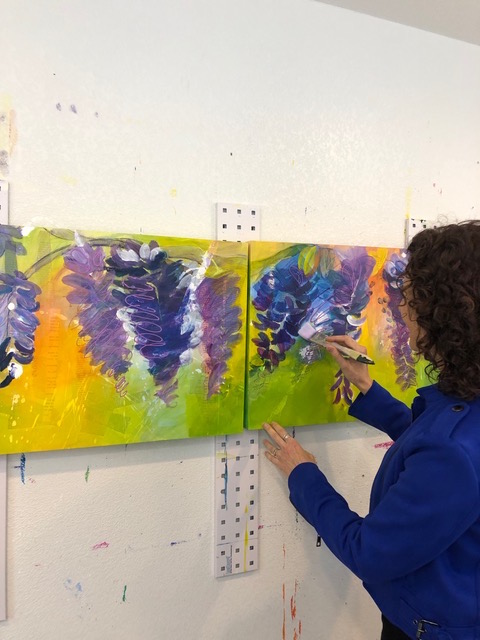 Siegel’s father, an accountant, and mother, a homemaker who ran the household with skillful precision, both appreciated art.  Rather than attend sporting events at nearby Shea Stadium, the family would venture over the 59th Street Bridge into Manhattan on weekends for regular visits to The Whitney, The Museum of Modern Art and art shows at Soho Galleries.  The family had a historical connection to the world of art and design through Siegel’s great-uncle and paternal grandfather who both served at the Onondaga Silk Company, best known for their American Artists prints in the late 1940s.

After earning her BFA from the Rhode Island School of Design, Siegel went on to build a successful career as a graphic designer specializing in corporate logo and identity design.  From RISD’s rigorous drawing program, Siegel developed the skill to draw straight lines and perfect circles by eye, without using measuring tools. But about 15 years ago, Siegel began to recall the joy she felt as a child when she was free to fill her sketchbooks with her own creations.  With her typical energetic approach to life, Siegel found time between raising her three children and her graphic design career to return to school to hone her fine art skills. As a person who finds goals and deadlines motivating, Siegel was quickly able to begin making and selling her lively paintings.

Now, as ever, Siegel is inspired by looking at art; Instagram is naturally a rich source for daily browsing, but in-person visits to shows such as the recent Monet exhibit at the DeYoung are the most fulfilling.  The biggest through-line of lifetime inspiration for Siegel remains her passion for rock ‘n’ roll. Siegel doesn’t understand how some artists can listen to dry podcasts while they paint. Instead, Siegel draws her energy from the music of artists such as Etta James, Marvin Gaye, and most especially Pete Townshend and The Who, turned up loud. 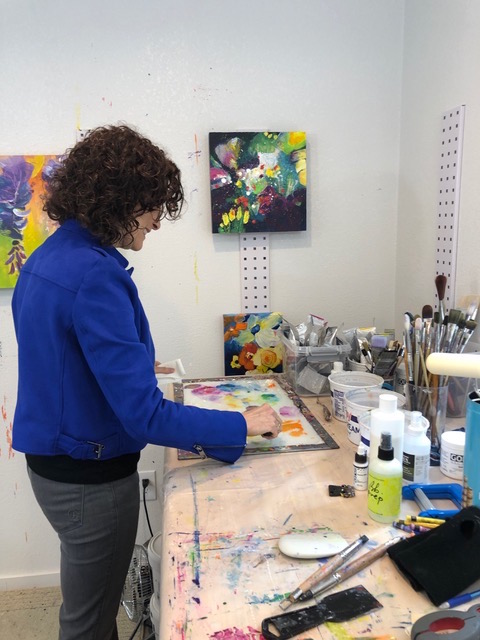 With the tunes on and a blank canvas on the studio wall, Siegel begins her new paintings with a layer of collage, typically using pages pulled from old books chosen because of their beautiful fonts.  Bringing her drawing skills into play, Siegel riffs on the circle, creating expansive fields of flowers in varying shapes and sizes. Siegel’s palette works like the layers of sound; as in an unforgettable rock tune like The Who’s “Baba O’Riley” (Teenage Wasteland), there are layers of sensory input that work together to form a powerful whole.  In one painting, ultramarine blue grabs the viewer’s attention and sets a moody stage for precocious oranges, fuchsias, and daffodil yellows that hold the eye for a time before the heartbreakingly tender pinks, ecrus, and white provide the final top note. 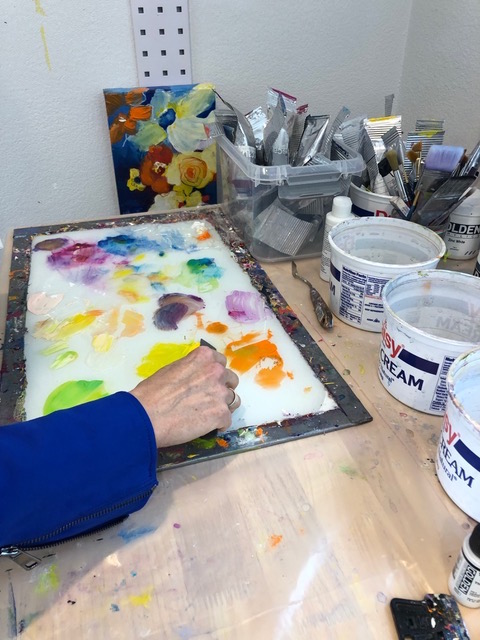 As we concluded our recent conversation, Siegel reflected that she hopes aspiring artists will realize that following their passions can be part of a successful life, while also understanding that proper training and recognition of the business aspects of art will ensure that success.

Siegel’s paintings are in collections in Palo Alto, San Francisco, New York and internationally. She is represented by A. Space Gallery in Menlo Park, and her paintings can be viewed at www.ruth-annesiegel.com.  Siegel is an annual participant in Silicon Valley Open Studios, May 11-12, 2019, and the annual Fine Art in the Park, May 18-19, 2019. 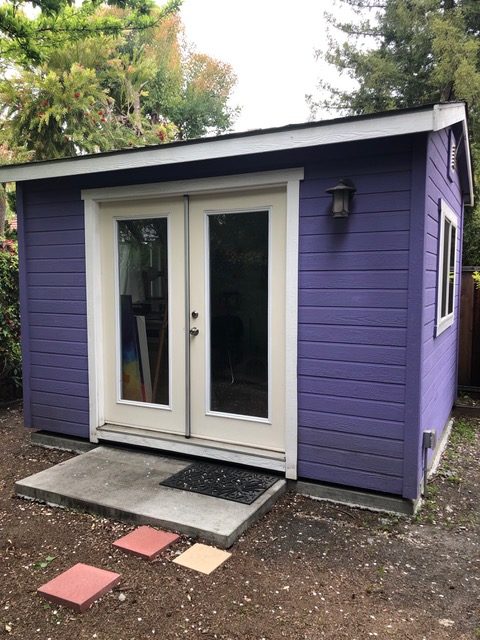 But color can't go away completely

Daring to add the figure